So many of our recruiters are involved with different charities and events outside of working at AB Staffing. Consequently, AB Staffing recruiter Jimmy Baldwin is involved with the Solid Rock Foundation. While working at AB Staffing, Jimmy developed a bond with one of his travel nurses by the name of Janet Thurston. Hence, when Janet came to Phoenix, she made sure that she reached out to Jimmy to let him know that she was attending a benefit concert to support Alice Cooper’s Foundation Solid Rock (www.alicecoopersolidrock.com). The Solid Rock provides Foundation provides free after-school arts programs to teens in the North Phoenix area of Arizona. Some of the free programs include music/vocal lessons, audio engineering training, dance lessons, and art classes. 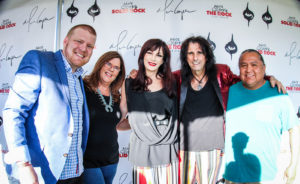 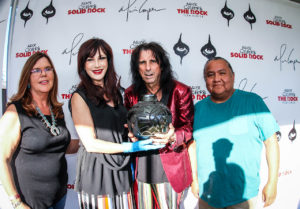 Jimmy and Janet attended the Rock & Roll Bash, in support of Alice Cooper’s Solid Rock Foundation and had the opportunity to meet with Alice Cooper after the show. Harrison Begay is a popular Native American artist and a friend of Janet Thurston. Harrison Begay presented Alice Cooper with a beautiful one of a kind gift.Most noteworthy, Mr. Begay gifted a piece of pottery to Alice and his wife Sheryl. Mr. Begay also donated a piece of pottery to the silent auction that evening.

“My job is to staff healthcare professionals nationwide. I love what I do, but rarely do I get to meet the healthcare professionals I work with. Last weekend, I attended a benefit for Alice Cooper’s Solid Rock Foundation with Janet, a Nurse Practitioner I’ve worked with since March 2015, yet we had never met face to face. Janet brought a guest, the well-known Native American Pottery maker, Harrison Begay, who presented Rock N’ Roll Hall of Fam Inductee Alice Cooper with a beautiful gift! As we found out in speaking with Alice, his foundation has done work with the Native American community, in addition, Alice’s Father was a missionary on the Apache Reservations in! What an event it was!” 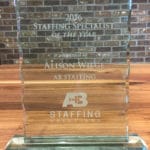