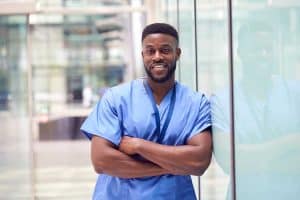 More men are employed as registered nurses (RNs) today than any other time in history, even though men once dominated the nursing profession. Are you curious to see how male nurses stack up against their female travel nurse counterparts? Here are some interesting facts about men in nursing roles and other travel nurse jobs.

In 2019, registered nurses earned a median wage of $75,000 annually. Although female nurses still dominate the nursing field as far as the number employed, male nurses earned on average more than $5,000 per year more than female nurses. The overall increase in male nursing wages may be accounted for because male nurses often choose specialties, with those fields paying higher wages. Technical specialties, which attract male nurses also pay higher wages which may also account for the numbers. However, research is still lacking to explain the differences in wages.

Throughout the United States, the number of male nurses working in Children’s hospitals, compared to female nurses working in the same environment, increased by 66 percent. Some hospitals saw the rates of male nurses doubling during the past decade. Aside from pediatric nursing, other popular specialties chosen by male nurses include, Emergency Room Nurse, Critical Care Nurse, and Flight Nurse, which have all seen a substantial increase in employment by males. The location had little effect on the statistics, with employment rates equally distributed in larger cities in an urban setting compared to employment in smaller rural locations.

Male nurse anesthetists account for 41 percent of all nurse anesthetists, which presents a statistically high number compared to the overall number of male nurses employed in all nursing specialties. Nurse anesthetics earn up to $162,900 annually while the median range for registered nurses in non-specialty roles typically earned around $60,700. Those numbers are expected to increase with the higher demand to meet the needs of an aging population within the United States.

Over the past 40 years, from 1977 through 2017, the nursing field experienced an exponential increase in male nurses. In 1977 there were 27,000 males employed in all fields of nursing and by 2018, that number had increased to 310,000 male nurses. For comparison, the total number of female nurses increased from 1.39 million to 2.9 million during the same timeframe. Overall, the total number of male and female nurses increased from 1.4 million to slightly less than 3.3 million from 1977 through 2018.

In 2012, The American Association of Colleges of Nursing (AACN) 2012 State of the Schools, of total schools with undergraduate nursing degrees and graduate programs polled, responses from 87.5 percent of schools were polled. It was reported that men comprised 11.4 percent of students enrolled in BSN nursing programs. Of all nursing students enrolled in master’s programs, 9.9 percent were men and 6.8 percent were male students working towards research-focused doctorates. In practice-focused doctorate programs, males comprised 9.4 percent of students. Researchers attributed the growing number of male nurses to less gender stigma in the profession of nursing, along with a high demand in the field for skilled nursing care due to the growing number of aging individuals in the United States. Furthermore, the study showed a direct correlation between the areas of studies male nursing students chose, relative to earnings potential. For example, males who eventually became nurse anesthetists realized earnings of over $162,900 annually compared to $60,700 for males working as registered nurses with no specialty.

Whether you are male or female, the demand for nurses is increasing every day. If you’re looking for a travel RN or LPN position, feel free to browse our job boards or give us a call to see what positions we have available.